Pavement owners have found that resurfacing asphalt with a concrete overlay (whitetopping) can create a stronger, more durable road surface with enhanced load-carrying capacity. By using DOT Cement instead of portland cement as the concrete topping, they can return a road to service much faster. The industrial-grade cement qualifies as very-rapid-hardening per ASTM C1600 (Standard Specification for Rapid Hardening Hydraulic Cement) and can be ready for traffic and loading in one hour.

Fast return to service was critical for this project. With work taking place over four consecutive weekends, completed intersections had to reopen to traffic each Sunday evening.

DOT Cement is a blend of Rapid Set® Cement and high-performance additives that can be mixed onsite with local aggregates for structural concrete work. Non-metallic, with no chlorides added, it is formulated for long life in freeze-thaw regions.

The contractor first milled the old asphalt to grade before pouring the concrete on top of it. Milling is done not only to level the surface, but also to enhance the bond between the concrete overlay and the underlying asphalt pavement. Once the material was placed, the crew finished the surface with a vibratory screed and applied a curing compound. As soon as the whitetopping was hard enough, the crew saw-cut joints into the surface in a 4-foot-by-4-foot, square-paneled pattern to control cracking.

The result was a smooth riding surface that stands up to the airport terminal's heavy truck traffic and provides long-lasting durability in New York's harsh freeze-thaw cycles.

Project at a glance
HOW CAN WE HELP YOU?
We're with you from start to finish.
Contact Us 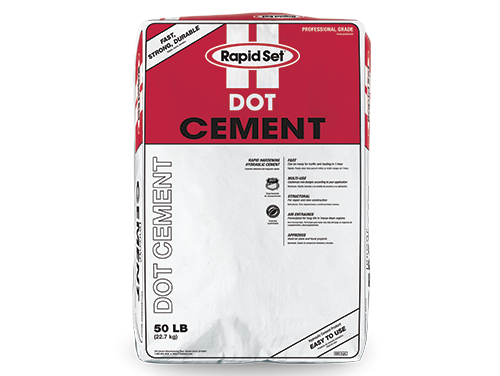